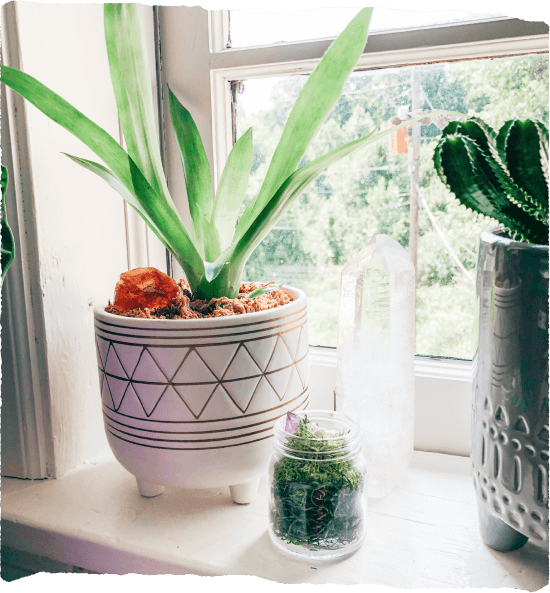 Let’s get nerdy for a second and talk plants, more specifically Bromeliads. They are part of the Bromeliaceae family. Bromeliads can adapt to various climates and have an array of different shapes and colors. Its foliage can be broad(wide) to needle-thin, symmetrical to irregular, flat, soft, AND spiky. While Bromeliads have roots, they actually gather most of their water by collecting it in the center of the plant. The leaves curl so that any water that drips on them slowly trickles down to the base of the plant. It basically makes its own water reserve!

Scientific Name: Bromeliaceae
Hardiness: Prefers 60º to 80° but can handle moderate freezing temperatures.
From: Primarily the Tropical Americas
Height: Varies from type. Most common nursery types grow from 1 to 3 ft but can grow up to 10 ft in the wild.

Some bromeliads prefer bright indirect light while others thrive in shade but more often than not they enjoy sunny spaces. Avoid direct exposure to sunlight as it can damage the leaves. As a tropical plant they are use to being low to the ground with the tree canopy filtering their sunlight.

While Bromeliads have roots, they don’t actually care too much for getting their nutrients from the soil. They prefer to collect their water with their leaves. The shape their leaves make create a center ‘cup’ in which it collects most of the water it uses. You still need to make sure you water the soil from time-to-time but the easiest way to water them is to pour water into their cup and let it spill out into the soil. Wait until the water in the cup has almost disappeared before watering again as you can still give this plant root rot if overwatered.

Bromeliads are fairly forgiving when it comes to accidentally forgetting to water them—although they love moisture and humidity (adding sphagnum moss to your soil will help with moisture). They are, however, less forgiving when it comes to getting too much sunlight. Once a leaf starts to scorch or get burnt tips, it will not regrow to correct those areas. It is also inevitable that your beautiful flower will die. When this happens it is best to ‘pluck’ it from the center of the cup. Doing so will encourage growth elsewhere which will allow pups to grow.

Bromeliads will only produce one flower (naturally) in its lifetime. (Pineapple plants do this too, they only produce one fruit!) There are ways however, to encourage a second bloom but it’s not guaranteed to work. Once the flower leaves, the plant will usually make pups if it has the right growing conditions. Pups are new bromeliads in the making, that are identical copies to the mother plant. They usually stay connected to the mother plant, feeding off its nutrients until it’s large enough to sustain itself.

I have a Bromeliad that had bloomed a few months back that I got on clearance at Lowes right after it started to wilt. I read about a few ways to force another bloom but I’m not going to attempt that with mine. For now I want to appreciate it for what it is.

Once the Bromeliad flower dies, the plant will usually make pups if it has the right growing conditions. Pups are new bromeliads in the making, that are identical copies to the mother plant. They usually stay connected to the mother plant, feeding off its nutrients until it’s large enough to sustain itself. Bromeliads can be propagated extremely easy as long as they are already growing pups. Pups can be ‘pulled off’ and separated from the mother plant once they reach about 1/3 the size of the mother plant. once they are that size they should separate with roots of their own which you can then just replant in a new pot with dirt. It’s best to mix some sphagnum moss in with your dirt so that it retains moisture. Bromeliads love moisture and humidity.

Fun Fact: pineapples are actually part of the Bromeliaceae family!

Catch you on the split leaf side!