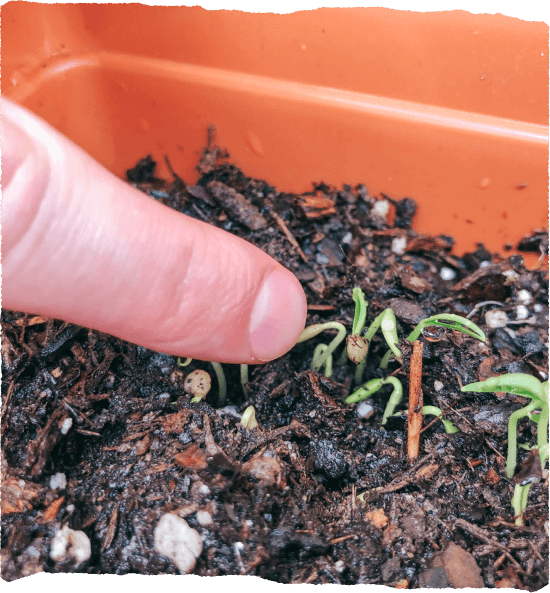 Can you take store-bought green peppers and use their seeds to grow new ones? Yep, you sure can!

With Spring being here I’ve been itching to grow some vegetables of my own to cut down on buying them from the store. We are currently renting a studio loft and don’t have any garden space outside so I knew I’d need to grow something simple that can thrive in a container. We also might be moving soon so having something portable would be the best idea so I bought some rectangle planters from Lowes.

I was having a hard time deciding on what I should actually grow until one night when making stirfry David cut open a green pepper that was FULL of seeds, more than I’ve ever seen before. At that moment I realized that we use green peppers quite a bit when cooking so I saved the core of the pepper to plant the next morning.

I filled the container with regular potting mix, about 2 inches from the top, and then sprinkled all of the seeds on top of the soil. I wasn’t sure how many would actually make it so I just let them fall wherever they landed. Most seeds don’t like to be too far below the surface so after I dropped them all I covered them with about 1 inch of soil and then gave them a hefty amount of water. Let’s see how they turn out!

Two weeks later and they are already sprouting above ground!

The same sprouts just one day later after a gooooood rain.

This is only one month in!

Two weeks later and they are out of the top! Ignore the gap to the left, I removed a section to give to a friend for his birthday.

This was my first attempt at my ‘grow with me’ series of posts. While I sadly was not able to complete the journey to full fruition, life events such as moving kept me from keeping these plants, we did find out it is possible to grow peppers from store-bought seeds! These photos are proof that by just sprinkling out all the seeds and giving them water and sun they’ll sprout very easily! I hope this post helped someone out there!

Posted in finished, Grow With Me